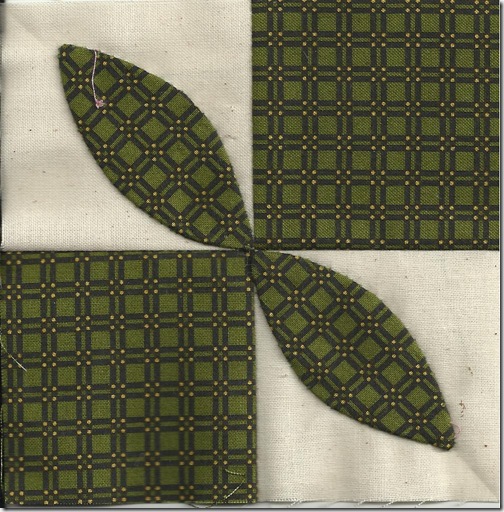 Another one three quarters finished except for the hand applique.  I had a sudden burst of energy a few months ago and made up all these blocks for my ‘free time’.  I read a lot of blogs and many of them mention they hand stitch when their children are at the playground, at the library – I thought I’d give that a go but it’s gone nowhere. That would require actually remembering to take the prepared stuff with you, instead of having it squished up in the bottom of the Dear Jane bag. So I’ve been forcing myself to sit still for an hour or so every day and finish my little stash of prepared blocks.

I’ve seen lots of variations on this block, the applique points in most of them don’t meet at the centre.  Mine does.

My littlest person has a school visit today.  The house is very quiet without her. 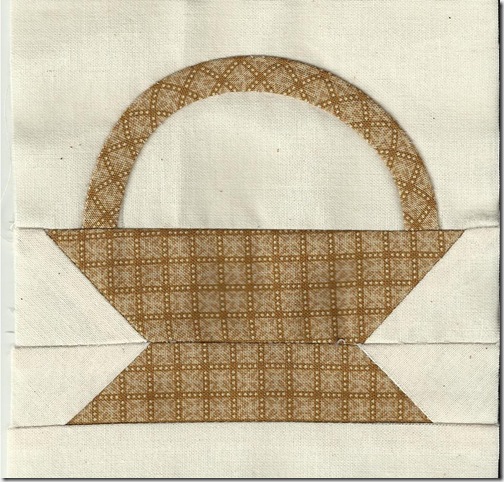 Would you believe this was made months ago, and all I had to do was handstitch down that teensy handle?

It’s done now.  I’m not a lover of this style of basket.  Maybe it was the popular basket design of Jane’s time.  Maybe she just liked it.  I get the feeling Jane was a ‘do what I darn well please’ kind of lady.

Don’t you wish you could meet her? Whipped this one up yesterday.  The experts online said the best way was paper piecing, but I managed okay with normal piecing.  Paper piecing makes me swear and I’ll save it for the really, really complicated ones.  This one wasn’t too hard, the teeny tiny half square triangles finish at one inch, I’ll admit they were a little scary but other than that, she looks okay?  I think so.

One thing about these extreme closeups, they sure do bring you down to size.  What looks well and good from a distance is magnified very much up close and make any errors stand out VERY much.

Cooking with gas now, I am.  Two Dear Janes in two days!  Woo Hoo!  She’ll be done by Christmas.

Posted by Silly Goose at 08:48 3 comments: Links to this post

Posted by Silly Goose at 21:06 3 comments: Links to this post

I know that I’m jumping all over the place with my projects at the moment.  I’m finding it hard to settle on one thing.  I’m not sure why I’m unsettled – perhaps a little too much on my plate to concentrate on.  It’s been blowing a gale today, and I’m not a lover of strong winds.  Give me rain any day.

So today, with a little bit of quiet time to myself, I was able to get back into Dear Jane.  I just felt like it. 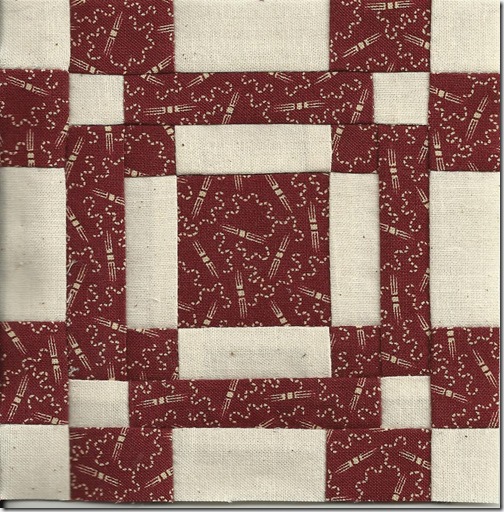 This is “Mama’s Maze”, or block E8.  Mine has the same cut pieces as Jane’s but my colour placement is different.  Sometimes I really do question what Jane was thinking – most of her blocks seem to sit right, and look right, and the pattern is clear.  You can see what she was trying to say with her block.  But this one?  I don’t think she knew what she was trying to do with it at all.  I honestly thought it looked like a red hot mess and I didn’t much like it.

So I changed my colour placement and I like my version better.  Sorry Jane.

It really didn’t take too long.  Couple of quiet hours in my sewing room was just what the doctor ordered.

I plan to tinker a little with the blog tomorrow and hopefully I’ll be able to get all my pages up to date, including where I am up to with Dear Jane.  I wish, I wish, I wish I could get my chart of finished blocks online, but I just am not computerly smart enough to do that yet.  I’m trying hard though.

So until tomorrow (though don’t hold your breath, you know how the days fly by!), happy quilting!

Posted by Silly Goose at 19:06 No comments: Links to this post

I had a little time to myself this afternoon, and got caught up to date with this week’s Grandmother’s Choice block.  I’m still miles behind on all the other ones, but I can cross this week’s off the agenda. 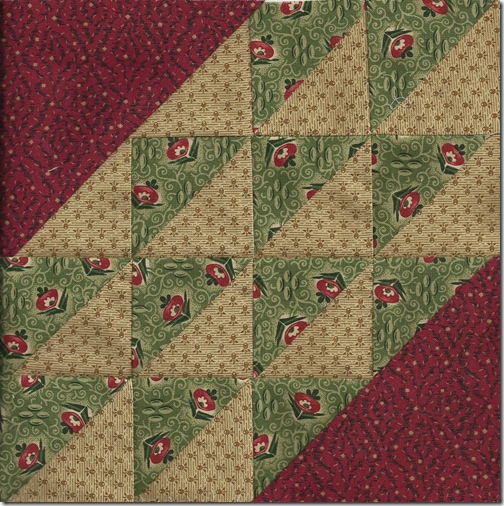 Very pleased with it, though some of the ones on the flickr page were a lot more adventurous in their colour choices than I and looked really pretty.  I need to try stepping out of my comfort zone a bit more, I think.

It’s been a hectic week here.  We have a sick child, another one threatening to go out in sympathy, not much sleep and yesterday we went to a wedding (which was just beautiful) by the river.  Temps yesterday were over 100 F so we sweltered.  But, as I said many times, at least I didn’t have a three piece suit on like the groom, or a heavily embroidered lace dress like the bride! (who looked supermodel gorgeous, by the way).

We get a day off our schedules tomorrow due to our annual Adelaide Cup day (horse race for those who have never heard of it).   Hopefully everyone will sleep a little later than usual!

I won’t hold my breath though.

Posted by Silly Goose at 18:05 No comments: Links to this post

I Built A Barn

So because I’m either a sucker for punishment, or because I have no will power at all, and despite declaring to the whole internet that I won’t start anything new, I started something new.

This is how I started.  Can you see what it is going to be? 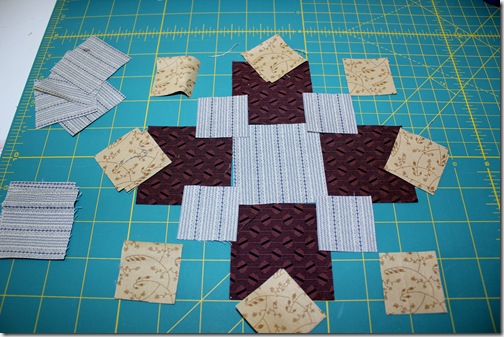 A few seams stitched together.  Is it any clearer? 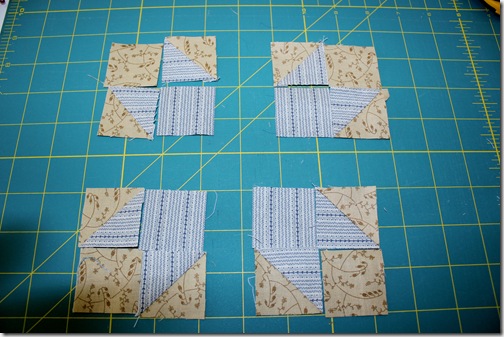 There we go.  A finished block.  But not quite finished just yet. 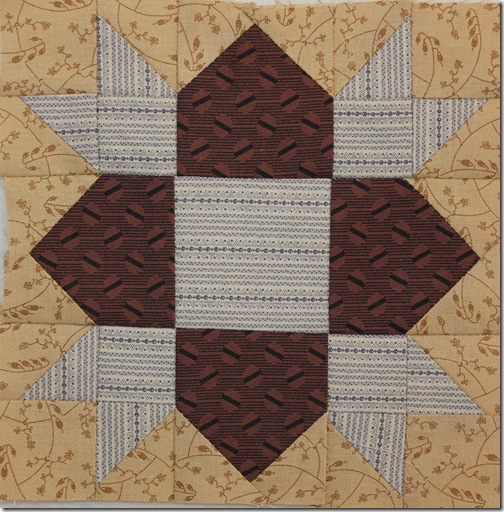 Tada!  I raised a barn.  Totally gave it away as a spoiler in the title line though. 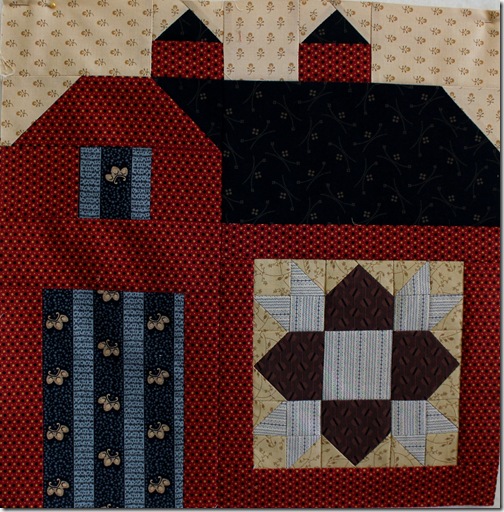 I got the idea from Bee In My Bonnet’s Quilty Barn Along.  I’d seen a lovely school house quilt block with the six inch block inserted, but I couldn’t quite make it work – I mean I couldn’t find a schoolhouse block that I liked enough to do it myself.  When I saw this one, I thought I really should have a go at that.  And this is the end result.

The finished block is about fourteen inches (really should have measured it before sitting down at the computer) and the small one is six inches.

It didn’t take too long, more than a morning’s work though.  I’m not sure how many I will make but I have a feeling they may be slightly addictive.

Posted by Silly Goose at 13:07 No comments: Links to this post

Email ThisBlogThis!Share to TwitterShare to FacebookShare to Pinterest
Labels: quilty barn along, what I'm working on

So a few weeks ago I had the lovely pleasure of going to my first ever real quilting class PC (post children).  It was bliss.

I arrived nice and early and set up my work station. 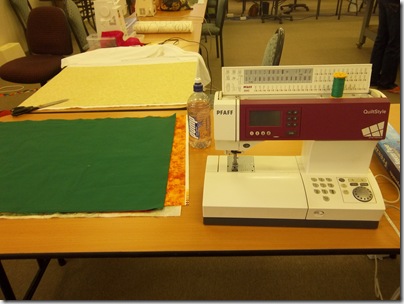 There were lots of ladies there to take the class but I had enough room to spread my stuff out ALL over.

Do you do that?  No matter how much space you are given, it’s never enough?

After I set up, I took a quick stroll to see the tutor’s samples. 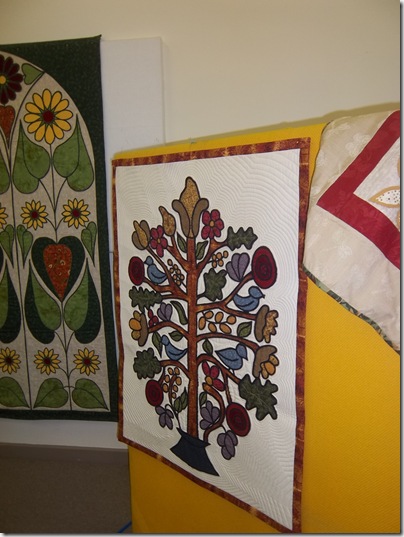 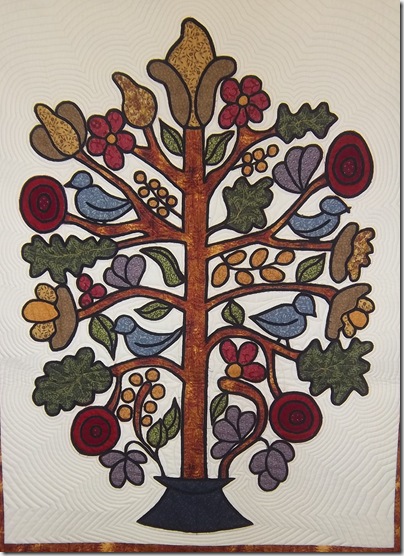 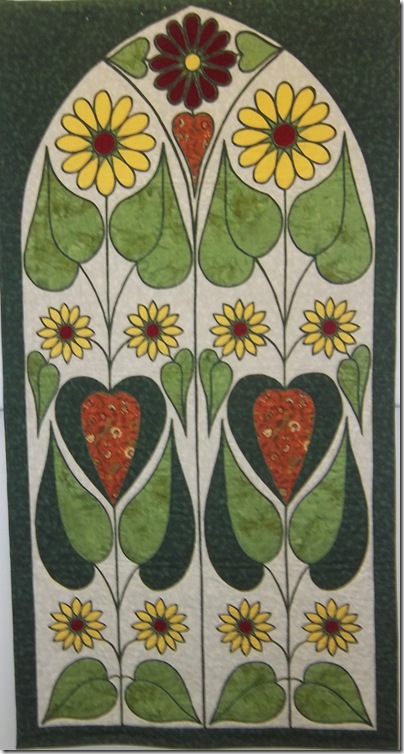 This was by far the most stunning one.  It was at least six feet tall and I don’t know how she did it, to be honest.  But it was stunning.  Gothic almost.  It looks like a church window to me. It’s no surprise that this tutor is the wife of a pastor.

The first thing we had to do was layer all our fabrics together on top of a thin layer of wadding, and lay our pre-traced freezer paper design onto the top of it. 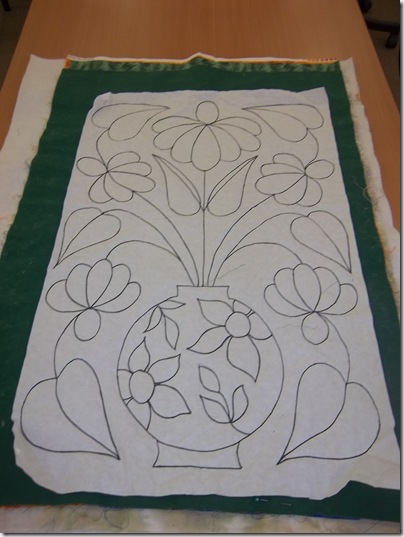 From there, we had to pin it well, and then hit the machines!

It was as simple as sewing on the marked line.  It was a bit cramped at times but the freezer paper softened beautifully and it worked very well. 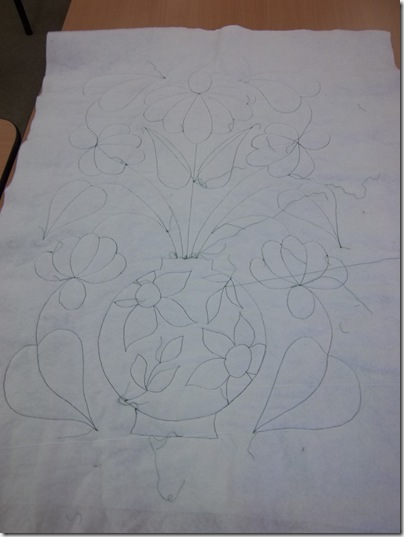 Turn it back to the right side.

This is the tutor’s sample.  Note the colours? I’d not seen it before this day.  I’d only seen a fairly grainy photo. 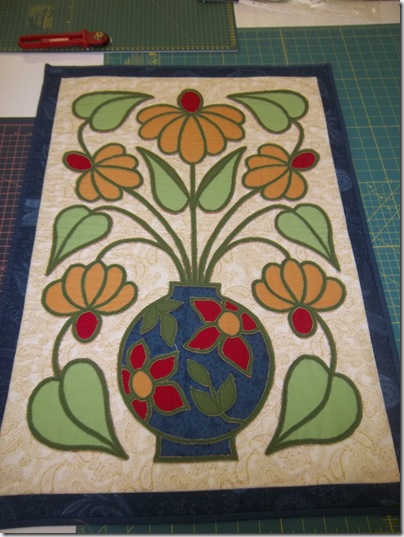 The real fun began after lunch.  We had to painstakingly trim away, with very sharp scissors, the bits that we didn’t want.  Harder than it looked.

This is Mum’s version.  She got along very quickly.  Smart alec.  Mine was nowhere near finished on the day.  Hers was. 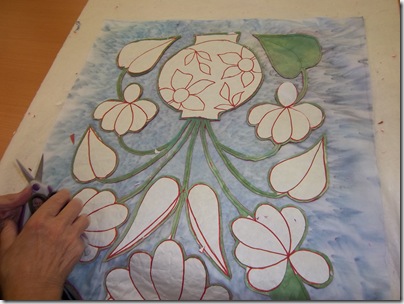 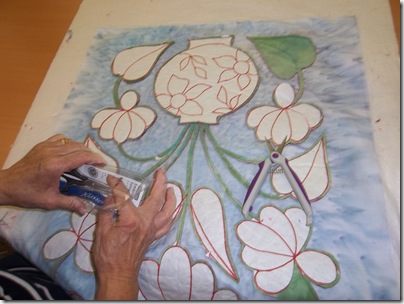 I plodded along.  I got lots done, for a first time class.  But I spent too much talking.  If I had put my head done and bum up I would have probably finished on the day. 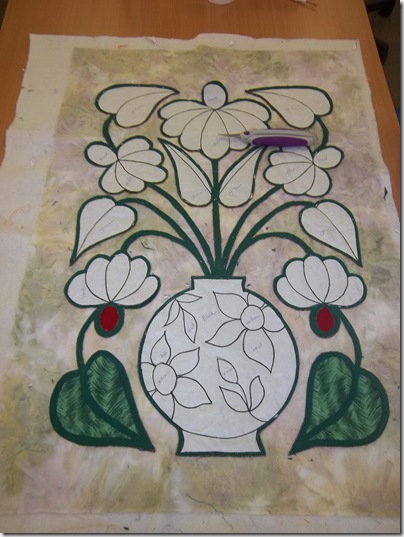 I did get enough done for a start though.  I was pretty pleased when I got home.  Exhausted, but pleased.  When I got home, after a few days (can’t rush these things) I finished it all up.  At least the cutting part. 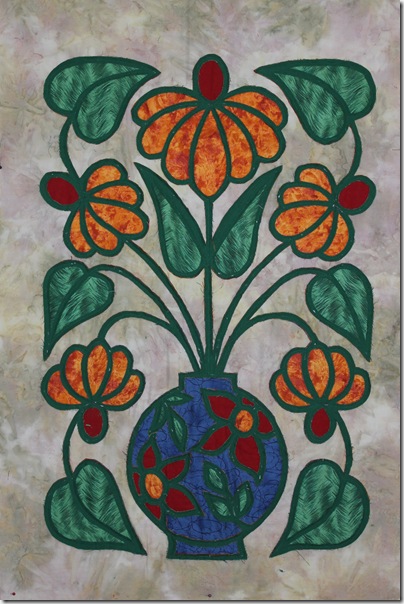 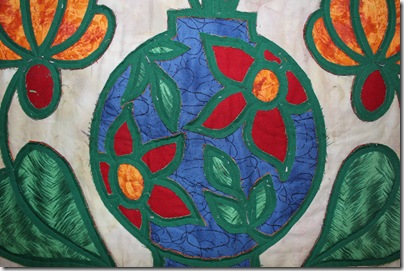 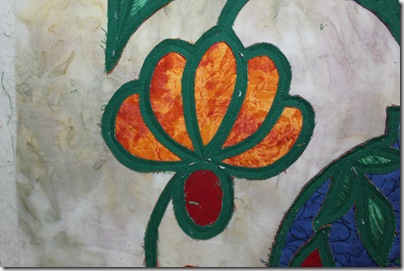 And that is the end result of my class.  I somehow managed to pick the exact same colours as the course tutor.  I’m not sure how that happened.  But I think I did okay.

It’s a long way from being finished but it’s done this much for now.

Posted by Silly Goose at 10:10 6 comments: Links to this post