A long time ago I was given a really lovely pouch from an older lady who made them for trading tables.  It was lovely and knew I wanted to make some for myself.  At least one.

I’ve been around the internet long enough to know that I’d seen some form of tutorial for something like it.  You can see it here: 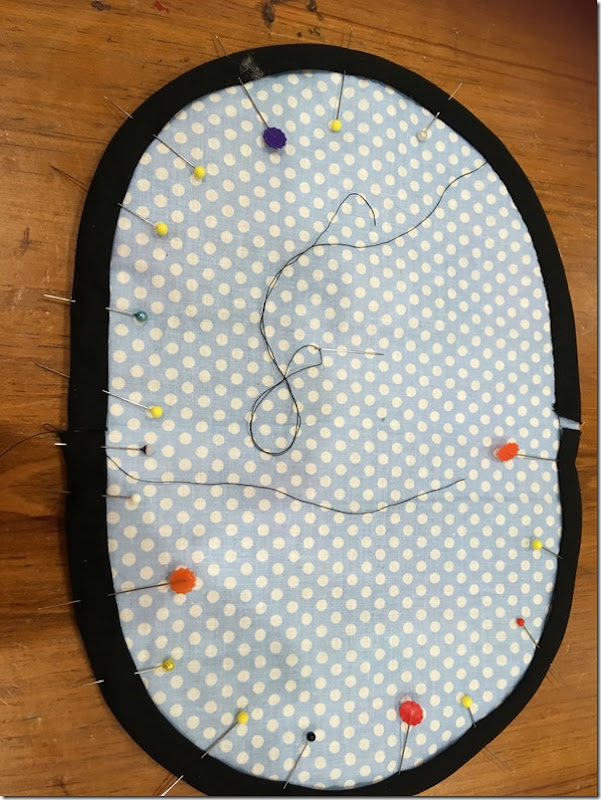 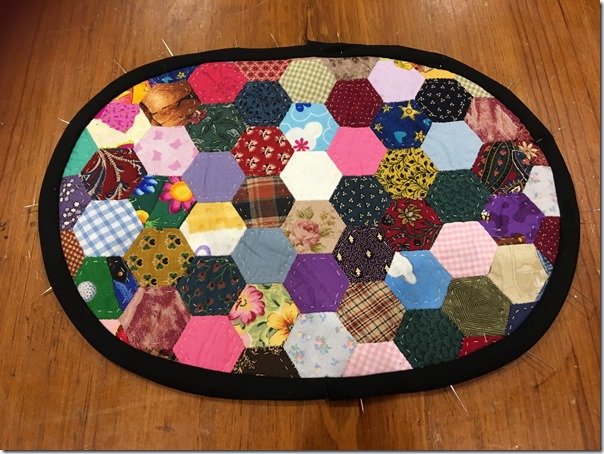 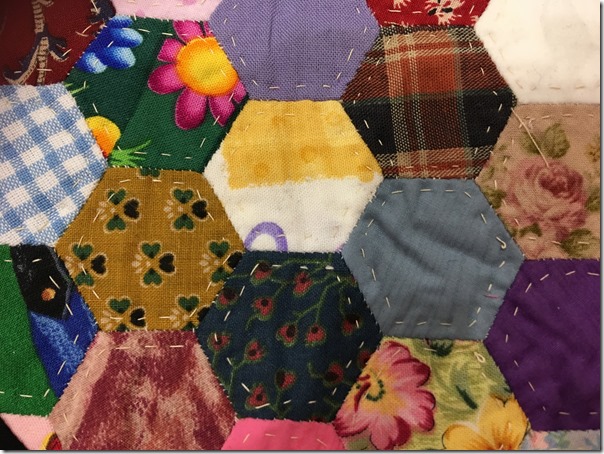 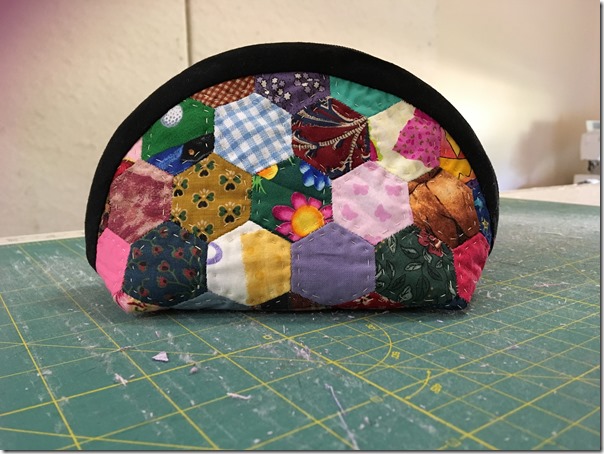 And there you go.  It’s done.  It really was quite easy, though I’m not loving my close up photos of my stitching (perhaps a change of thread colour is in order).  Putting the zip in by hand was actually remarkably easy, perhaps even easier than doing it by machine.  Way out of my comfort zone but I’m very pleased with the result.

(and how hideous is my cutting mat??)

I’ve made some kits up so I can take them places when my Ballet Project finally gets done – it’s taking all my will power to limit that to the car only, and it’s getting stitched way faster than I imagined it would.  So it’s good to have something in the pipeline, don’t you think?

Hope you’re having a great day!

End of June–Where’s it gone?

There’s been a lot happening behind the scenes here in my little corner of the world.  Lots of little jobs being ticked off the list, which is immensely satisfying, I must admit.  It’s been a six month whirlwind, with much adjustment by me to try and make a ‘new normal’ – having a daughter in highschool and another in a primary school, and both of those schools being in different towns is certainly adding a whole new level of challenge to my daily routine.

But we keep swimming, as Dory would say.

I’ve decided that where possible, I am allowing myself an hour a day to sit and hand quilt.  It’s very good therapy for me, to force myself to sit and just ‘be’ for a little while and so, I have returned to this old thing: 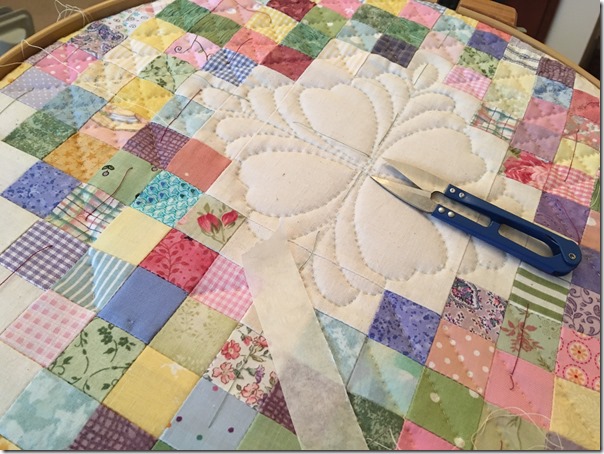 Which sits in the corner of my living room so patiently, and has done so for years.  I’ve been catching up on my required viewing: 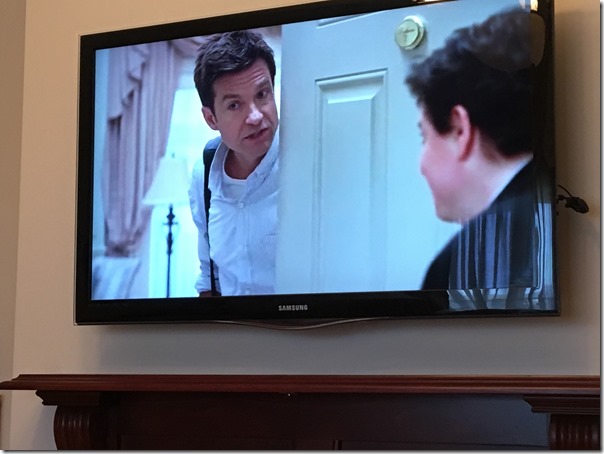 Season Five of Arrested Development, in case you didn’t know.   I’m currently in mourning that Westworld Series Two is finished and I needed to find something to replace it.  It’s okay.

It’s no Westworld, but it’s okay.

Just want to share with you another issue we have here in our little pocket of the world: 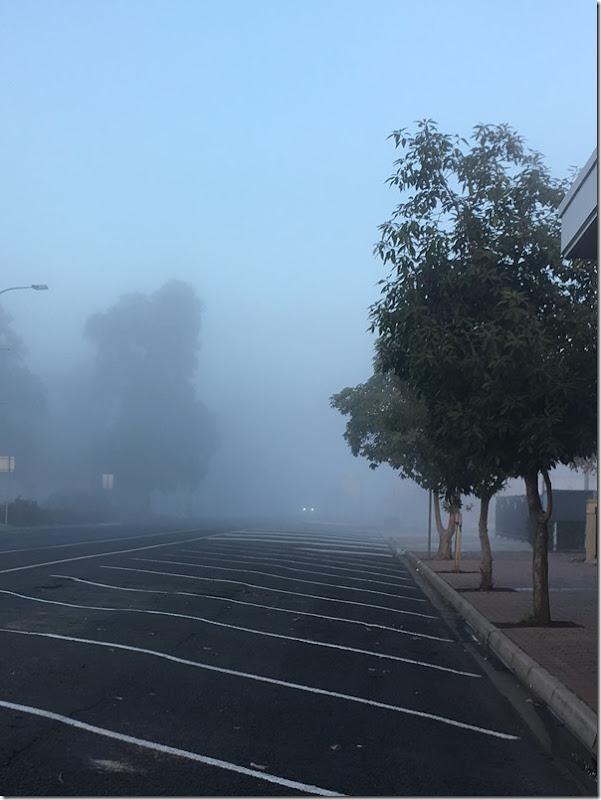 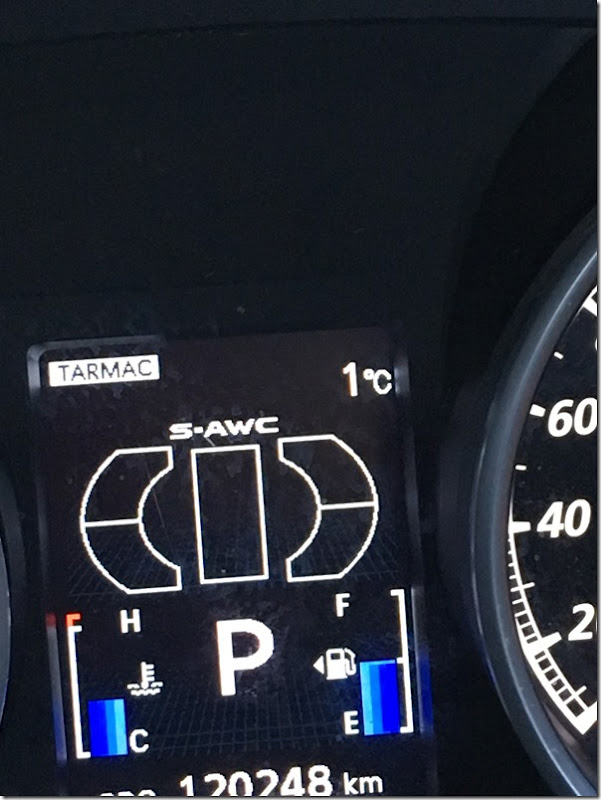 Yes, it is nearly zero degrees with zero visibility also!  We launched straight from Hot. Hot.  Hot. to Flipping Freezing with not much in between!  Not that I’m complaining about the weather, it just makes typing very difficult in my computer corner!

Hope you’re all doing well in this topsy turvy Looney Tunes world we are living in right now.  Very hard to focus on the positive, but I’m trying my best.

Some time ago I started a scrap star quilt from leftover reproduction fabrics.  It sewed together really well and I was more than a little in love with it. 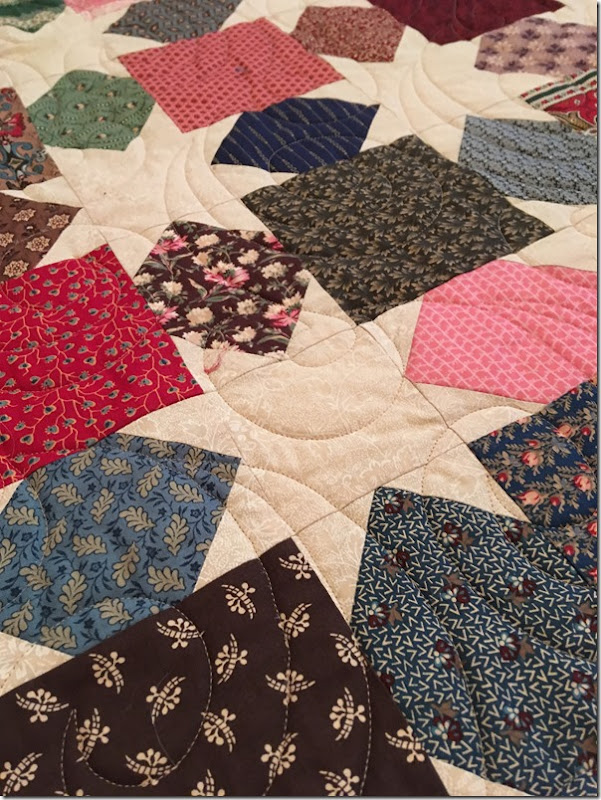 At the same time the need for a new bed quilt was very apparent.  Our old bed quilt has been there since before my dad died, and he’s been gone nearly twenty years.  So it was time. 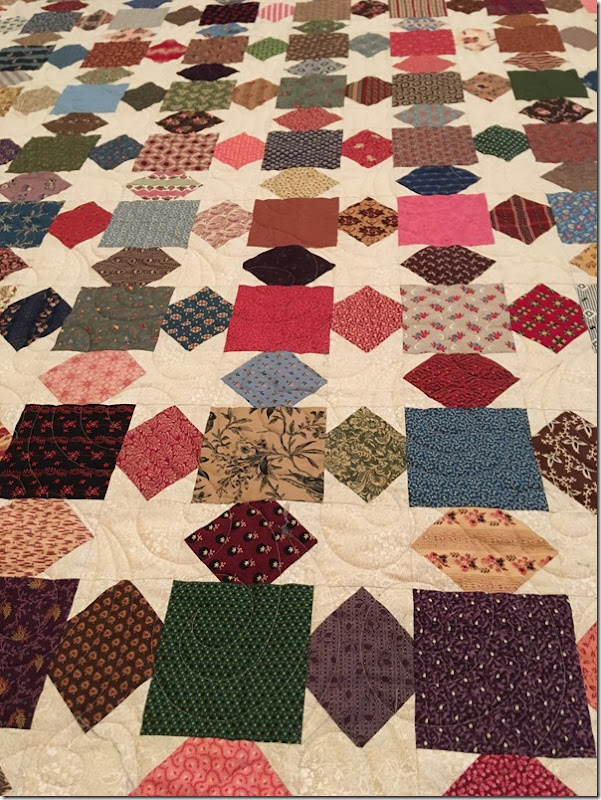 I decided that this quilt would be the new bed quilt. 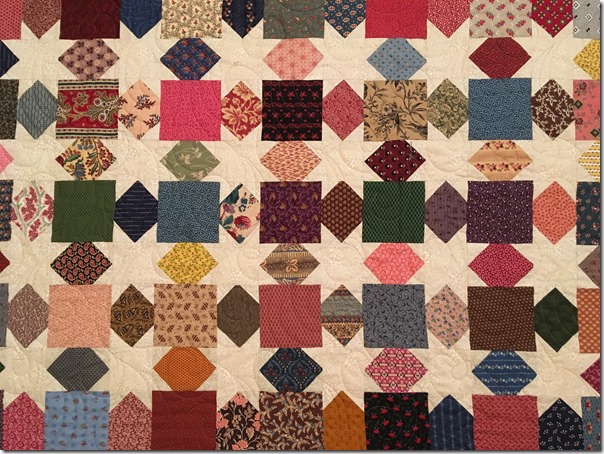 So last night I finished the hours of binding stitching and it’s done!  And it’s on! 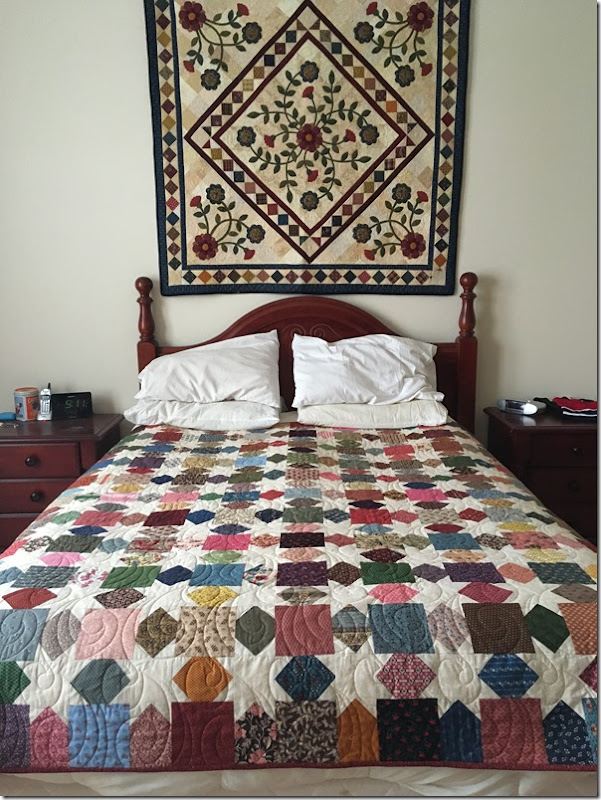 And it’s not big enough!

It’s fine, it’ll be just fine.  We’ve had the bed ten years and it’s a total dud, so in a fit of money spending I brought a new bedroom setting, and that arrives in a month or two.  I’m hopeful it’ll fit perfectly!

The quilt on the wall you’ll recognise too.  I’ve been trying hard to ‘style’ my house more so it looks like grown ups live here, rather than the ‘we moved in when the baby was a week old and never did any styling at all we were just trying to get through our days as best we could’ type of styling we’ve been living with.

I spent a long time hanging pictures and moving old furniture around, and it’s looking very nice.  Room by room is the key. 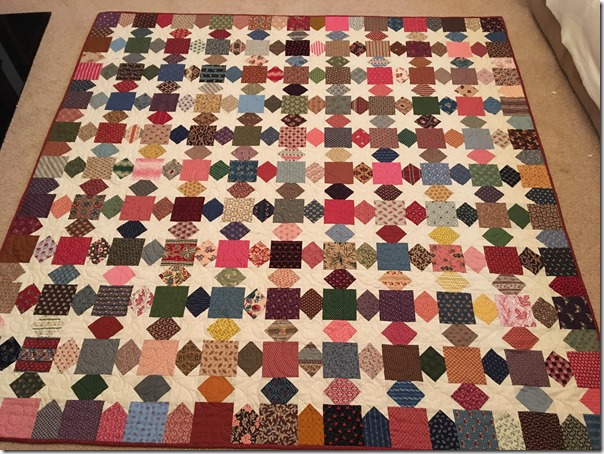 I laid the quilt on the lounge room floor last night after I finished the binding.  You know you’ve made a great quilt when it’s perfectly flat, no woofy-ness on any of the borders.  I didn’t do anything different this time, I don’t know why this one worked better than the others, but it’s not woofy at all.  It’s a good quilt.

Have a great day.

You’ve probably seen my monster quilt (here and here for those of you who don’t remember).
I ended up doing a very Suzie thing – made a couple of blocks that just wouldn’t fit in the maths of the previous two quilts, so I did another very Suzie thing – I made a new one. 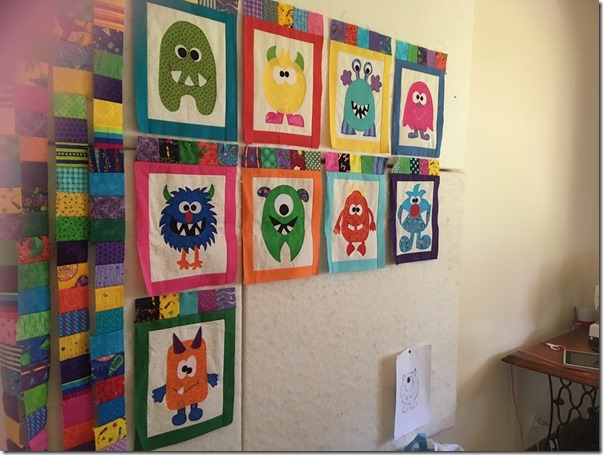 You’ll be pleased to know that I have a new phone case on my phone, so that lovely pink haze in the left corner is no longer there. 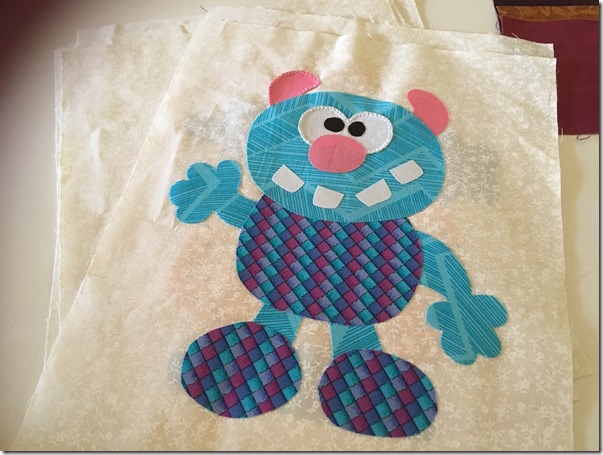 I’m halfway through stitching this one. 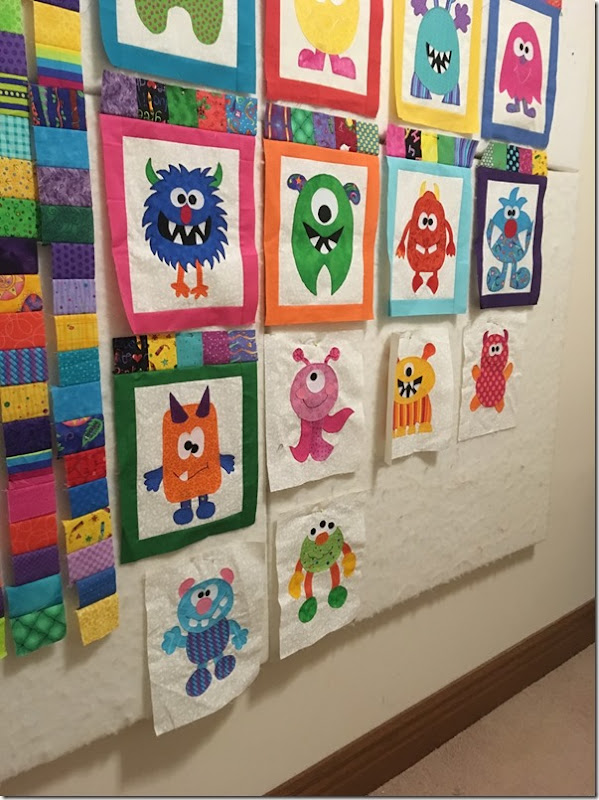 He fits well in there, don’t you think? 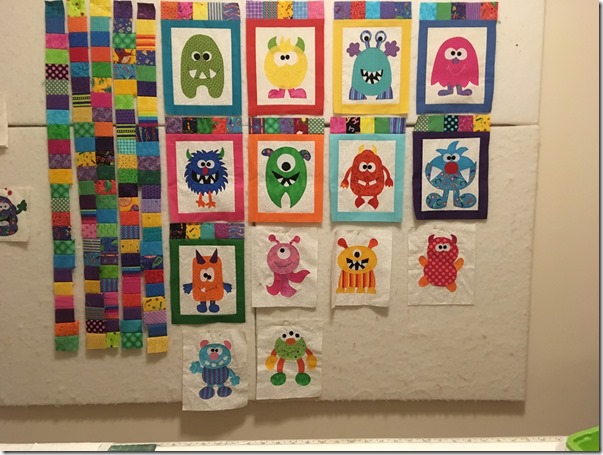 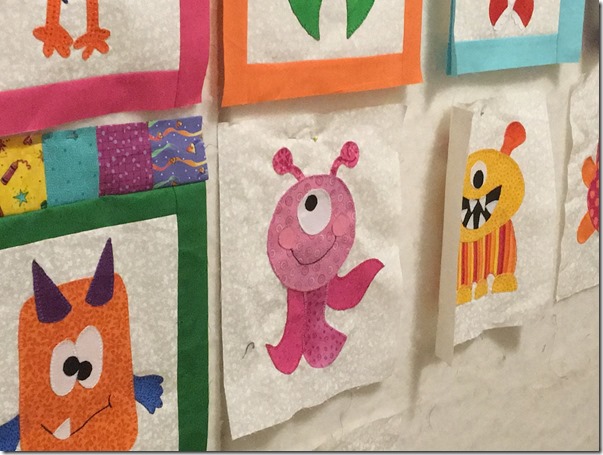 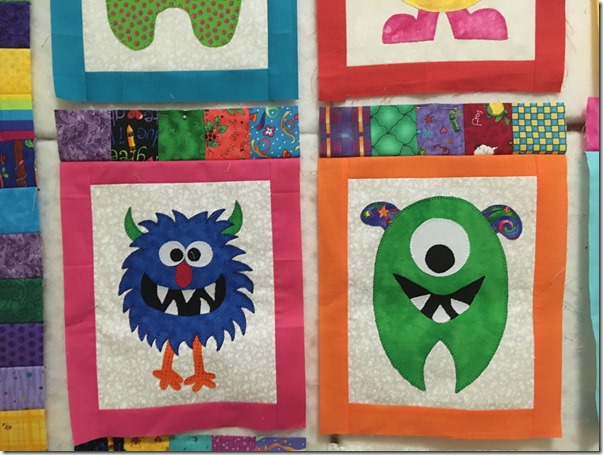 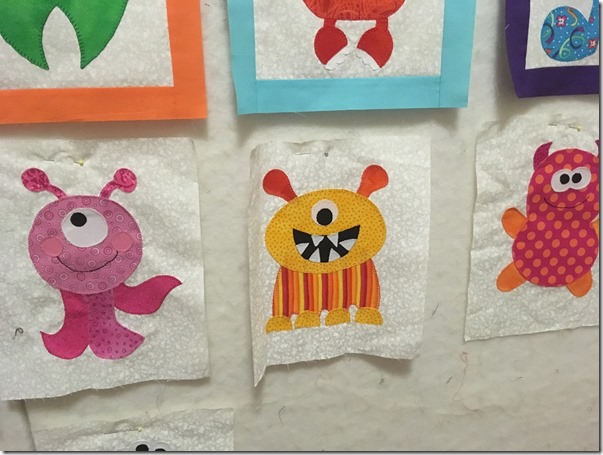 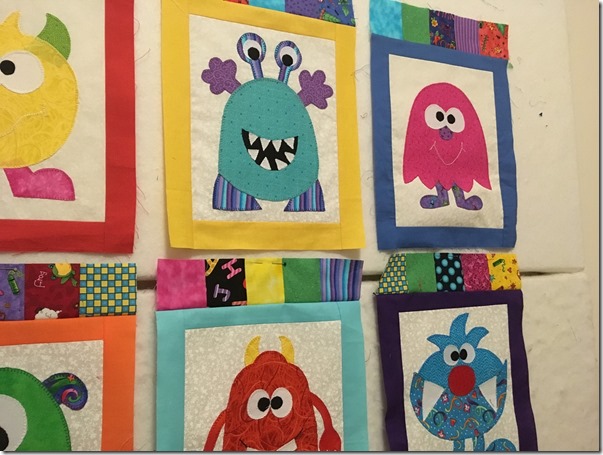 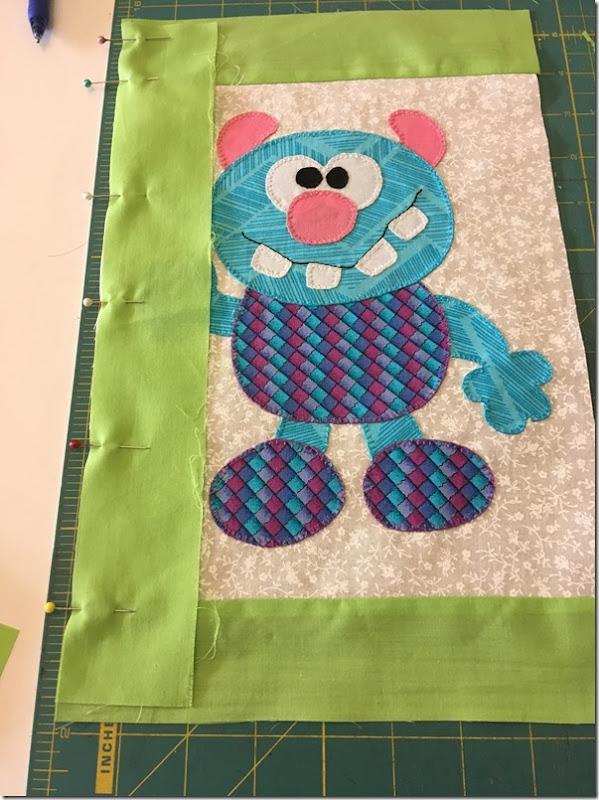 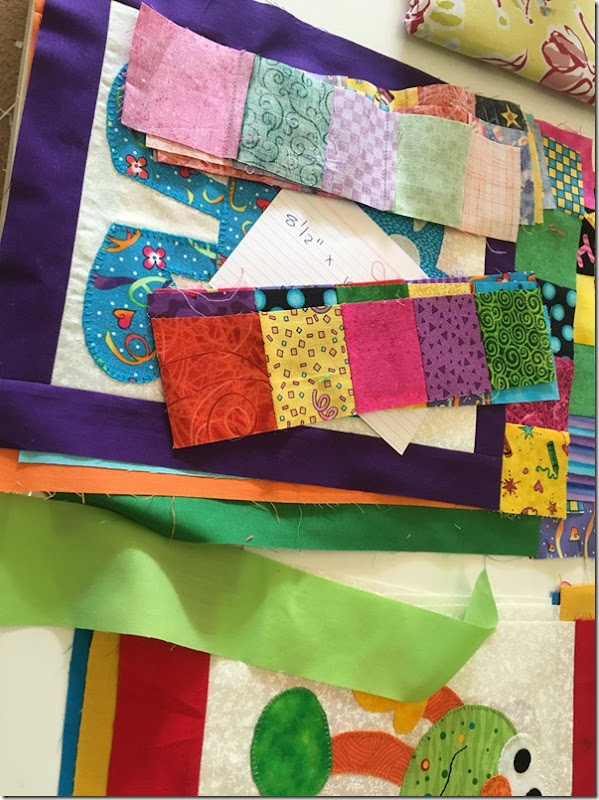 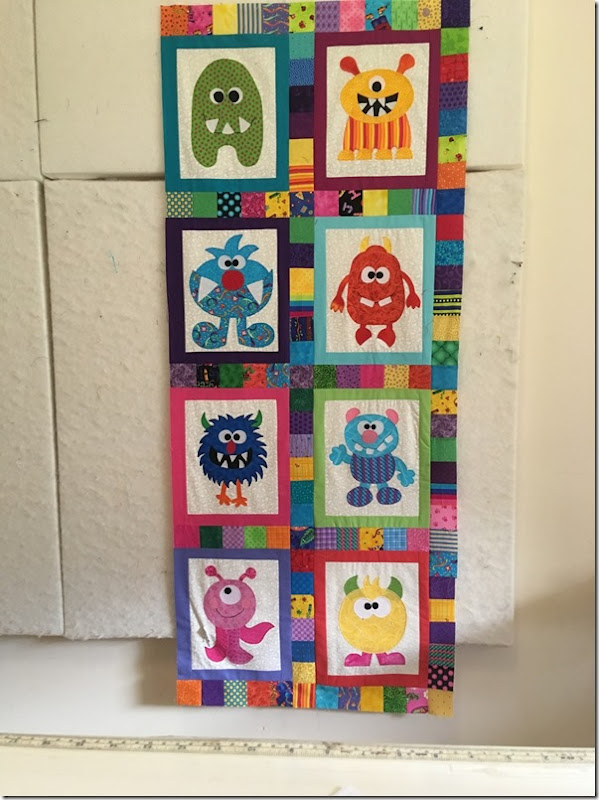 It’s amazing how quickly these little guys do actually work up. 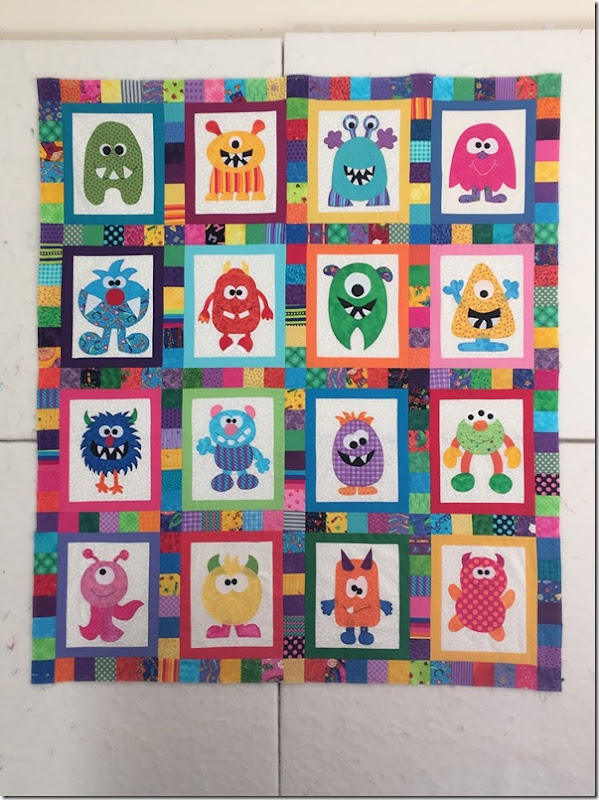 I’ve been using all my brights up.  My brights are quite precious to me, much like my thirties prints and I get a bit tense when the box empties.  I can guarantee you now, I will never allow myself to run out of brights!  Orders online may or may not be in place already.
I’m trying to juggle many balls right now and for the most part I think I’m doing okay, but it only takes one stumble for the whole lot to fall – the current stumble is I’ve lost my quilt diary, the one that has ever project I’ve ever done.  I’m feeling very hyper-ventally about the whole thing, and I’m so cross with myself.  It’s here somewhere, but I’ve looked in all the usual and not so usual places and I can’t find it.  The thought of trying to sift through the whole house looking for it is doing my head in and the thought of losing it for good is even worse!  Do my quilts exist if I haven’t written them down in a book?
Anyway.  That’s my update, hope my bright little boys give you some pleasure – I know there’s a lot of us feeling very unsettled and anxious right now.  Two words of advice I try to live by – ‘This too shall pass’ and ‘Try and keep your sense of humour’.  Can’t hurt, might help?
See you soon.
xx